How can humanitarian aid be more effective? Ask the locals 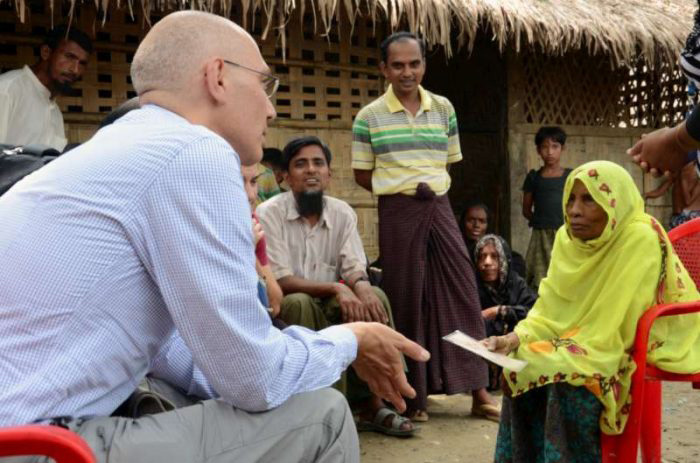 The dust has settled on the World Humanitarian Summit but many of the issues discussed at the conference a few weeks ago still dominate the headlines. The devastating impact of the Syrian conflict on civilians. The endless influx of migrants and refugees into Europe. The increasing gap between funding needs and shrinking aid budgets. Is there really something we can do to improve humanitarian aid despite this worrying picture?

For a start, let’s take a look at humanitarian crises as they typically happen on the ground. A natural disaster or conflict strikes, causing a high number of victims. The international community – non-governmental organisations (NGOs), the UN, donor agencies – rushes to the rescue. Massive relief operations are put in place for an undetermined period of time. Often what was meant to be a quick intervention turns into a long, complex programme depending on the nature of the crisis, which may be recurring. More importantly, the success of the programme depends on whether developing country governments and local communities have been involved in the operation and are in a position to take over.

This last factor, the role of local communities in managing humanitarian aid, is still the weak link of the chain. As suggested by several case studies conducted by Collaborative Learning Projects (CDA), things would change for the better if only local perspectives carried more weight in the decision-making process. In particular, field visits in Ethiopia, Haiti and Myanmar – three developing countries that have received large amounts of humanitarian aid over the last few decades – highlight striking similarities in how local communities consider humanitarian interventions to be effective. Let me focus on three commonalities.

Thirty years after the global Band Aid initiative, locals note there is still a mismatch between the quick-fix nature of humanitarian operations and the long-term solutions that are almost always required to overcome structural crises, like the famine cycles in Ethiopia. To local communities, not only is operating in eternal emergency mode ineffective; it can also become itself an obstacle to a permanent resolution of the crisis, as it breeds aid dependency. We need to put in place programmes with a clear exit strategy, programmes that facilitate a transition to longer-term rehabilitation and development, with correspondingly longer budget cycles – or we will keep seeing more of the same problems in the coming years.

The politics of context

Long-term solutions mean political solutions. Local communities understand that, when conflict or war triggers a humanitarian crisis, resorting to aid will only go so far. Sooner or later, humanitarian workers will be confronted with the root causes of conflict, and that will put the humanitarian principles of neutrality and impartiality to the test. Humanitarian efforts in Myanmar’s Rakhine State are a good example of just how complex it can be to bridge the gap between principles and political reality.

Acknowledging the need for political solutions can also be risky. It can expose humanitarians, who often have access to conflict zones on condition of their neutrality and impartiality, to accusations of political bias and even reprisals. Local staff are at the heart of this dilemma. It can be challenging to partner with local civil society organisations when their staff come from the same religious, ethnic or political background as one of the conflicting parties. In turn, many local actors note that international NGOs cannot ignore these ties and have a lot to learn from local communities about the context in which they operate.

The “Republic of NGOs” model

Truly effective humanitarian action is well coordinated from the bottom up, with the government of the country affected by the emergency leading or as engaged as possible. Too often, however, government, civil society and even the private sector of the country in question feel sidelined by international agencies under the assumption that local capacity is too low to make a difference. A case in point is Haiti, nicknamed the “Republic of NGOs” in the aftermath of the 2010 earthquake. With hundreds of international NGOs barging into the country, local associations, medical clinics and public officials were virtually excluded from UN-led intervention, when in fact they had played a vital role in the hours and days immediately following the disaster.

Asking the locals is a key lesson learned from CDA’s case studies and the global UN report they informed, “Leaving No One Behind. Humanitarian Effectiveness in the Age of the Sustainable Development Goals”. But asking for feedback is only the first step, and it can backfire if we don’t follow up on the information we receive. Managing local communities’ expectations, being accountable for how we treat requests or complaints is a far bigger challenge, one we have yet to crack. As a representative of the UN Office for Coordination of Humanitarian Affairs noted last year, “community feedback is fundamental and not up for discussion; the question is how… we do it. We as a community still haven’t come up with a standard operating procedure and that’s absolutely something we need.”[1]

I’d say it is not just about agreeing a standard operating procedure. It is about making humanitarian aid work for the people who need it.

Have a great summer break and see you back in September!

[1] United Nations. (2015) “Leaving No One Behind: Humanitarian Effectiveness in the Age of the Sustainable Development Goals.” OCHA Policy and Studies Series, p. 39.