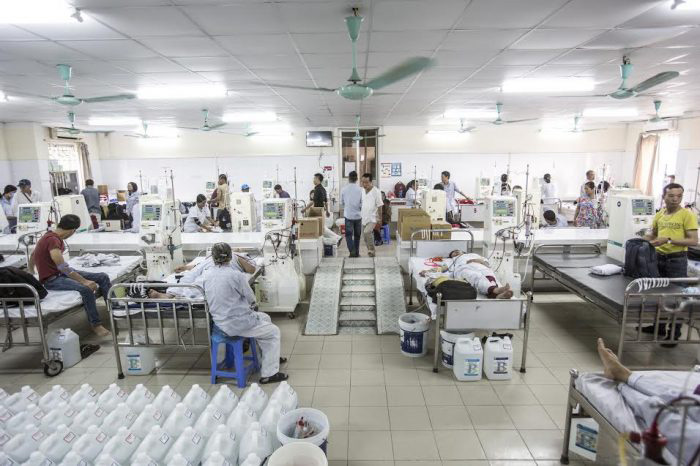 I continue to explore how developing countries go about increasing their tax revenues as a way to escape from poverty, reducing the need for aid and other forms of international co-operation. In jargon, we call these efforts domestic resource mobilisation.

This time I have spoken with Huong Nguyen, Non-Executive Director of the Vietnam Initiative Social Enterprise (VNI), a leading Vietnamese think-tank based in the country’s capital, Hanoi. As part of a pioneer tax and domestic resource mobilisation project carried out in collaboration with Oxfam, VNI has developed a tool called the ‘Patient Satisfaction Index’ to monitor the quality of health care in public hospitals across the country. The idea is that by gathering patients’ feedback on the quality of the treatment received in hospital, VNI can collect useful information on how the government spends budget funds on public health. More importantly, the Patient Satisfaction Index can provide credible evidence to show the need for higher budget spending to support better health care services.

Huong, why is VNI interested in working on domestic resource mobilisation?

Most of us at VNI are researchers already working on this issue. We are spread across the world and connected to high-ranking public officials in Vietnam through a wide contact network. This is the first time we have collaborated with Oxfam on the Patient Satisfaction Index and really appreciate this opportunity. The 2008 financial crisis seriously impacted Vietnam. It revealed structural problems, such as macro-economic instability and the threat of a debt crisis. Since 2008 our government debt has doubled to approximately 65% of GDP. Also, Vietnam recorded a budget deficit of 5.9 percent of GDP in 2009, which was actually 9 percent according to the International Monetary Fund (2011). As a result, the role of the private sector in delivering public services has been increasing rapidly. We think we should be paying attention to this area.

How does your work on domestic resource mobilisation relate to health care in Vietnam?

Despite the high economic growth rate, our household survey has revealed that out-of-pocket health care costs represent 40% of total house expenditure. And last year government announced it would bring health care fees up to market levels to make them sustainable. Since health insurance coverage remains low, affecting 80% of the population, we think health care authorities should listen to people’s concerns.

Tell me about the Patient Satisfaction Index. What is it and how does it help improve patients’ treatment in hospital?

The idea is that patients should be at the center of public health services. We lobby for the idea of evaluating the patients’ experience so patients have the power to put pressure on care providers and improve the quality of health care. We also ask them about out-of-pocket and informal money they have to pay. Earlier, people’s voices were never listened to. Patients had never been considered clients, as in a market economy. In some hospitals, patients might be treated as second-class citizens. Over-crowding is rife. A 250% occupancy rate in some public hospitals means three people share one bed!

The good thing is that we are working with the Ministry of Health  – this is a big advantage for us because we are not starting [advocating better health care] from scratch. Since 2014 the Ministry has led its own evaluation project, including the patient satisfaction survey. However, the survey methodology should be improved to make it more reliable and less time-consuming. Currently, patients are interviewed by hospital staff before they are discharged from hospital, which definitely causes a conflict of interest. As a consequence, the survey results drawn by hospitals themselves have not yet been published officially. We do hope that the participation of an independent think tank like Vietnam Initiative will help fill a void.

As I speak to you, there is not enough budget for health care in the country. As a result, the Ministry of Health is keen to grant more autonomy to public hospitals. They, in turn, increase their fees and gain power. Our argument has been that by developing a new monitoring tool [like the Patient Satisfaction Index], the Ministry can regain at least some control over the health care provided at local level. The Index allows you to monitor society’s feedback, compare services between similar types of hospitals and improve the overall quality of public health care. Our Index is meant to be used as an independent tool.

Are women and youth part of this survey? Do they say anything different from the rest of the patients surveyed?

We are just getting started and are still working on aggregate data. I expect to be able to give you more details in July.

Are people willing to rate public health care services with VNI? How do they respond when you ask them to hold health authorities to account for how they have been treated in hospital?

You have to consider that patients are still getting used to giving feedback on the public services received. In general, people are just now learning about the power of their voice, so it’s not easy to ask them to tell the truth. We don’t have anything like boycotts here yet. Sometimes people are eager to give their feedback but don’t have time, they need to work during the day. As VNI, we have to persuade former patients to answer our phone calls. When we tell them that their feedback will be considered a reliable source of information to health authorities and help improve the quality of health care delivery, people usually tend to be more responsive. Our current response rate is 70% of all the patients to be surveyed.

Have you noticed any changes in the way the people you have surveyed talk about health care since you first contacted them?

It is too early to say. We started with the actual interviews only last March. We have about a thousand people to call.

Speaking more broadly, do you think the Vietnamese generally see a relation between taxes collected and health care services provided? How do the people you have contacted describe this relation?

Citizens usually don’t talk much about taxes and services, only the intellectual elite does. But now, due to the budget shortage, we have a lot of public-private partnerships and infrastructure projects affecting the cost of road transportation. People now have to pay toll fees in some places. They never had to do that beforehand and in some rural areas they are showing their disapproval.

We need more education about taxpayers’ rights because this situation is related to the way the budget is being managed. Transparency and accountability need to improve. In fact, citizens are relying more and more on social media to express their opinion and call for higher responsiveness from authorities.

What are the priorities for these people, including women and youth, when they talk about health care? What matters to them most?

They care most about the treatment received and the payments they have to make. I will be able to tell you more in the next months. We have improved the quality of health care thanks to people’s voices. The Ministry of Health also deserves a lot of credit as the first Ministry of this government to conduct an independent evaluation. And we know health care is a highly sensitive issue. We need to have good communication with the government and support the Ministry in this effort.

If you could go back in time, would you change your original approach to working on tax, domestic resource mobilisation and health care? If yes, how?

In a developing country the biggest challenge is whether they [government and others] let you do it, not the technical side. Will they use the information you are collecting? I hope international organisations can understand how complicated it is to run this project at the highest policy levels. For our [monitoring] project to influence the highest political figures, we need high expertise. You need to understand both the country and the global policy context. Before rolling out the Patient Satisfaction Index, we should have reached out to the central government and made sure the process would be sustainable. This is a lesson for all international NGOs and part of a learning process. If you want to make an impact nationwide on government regulations and their implementation, you should invest more in action-oriented research.