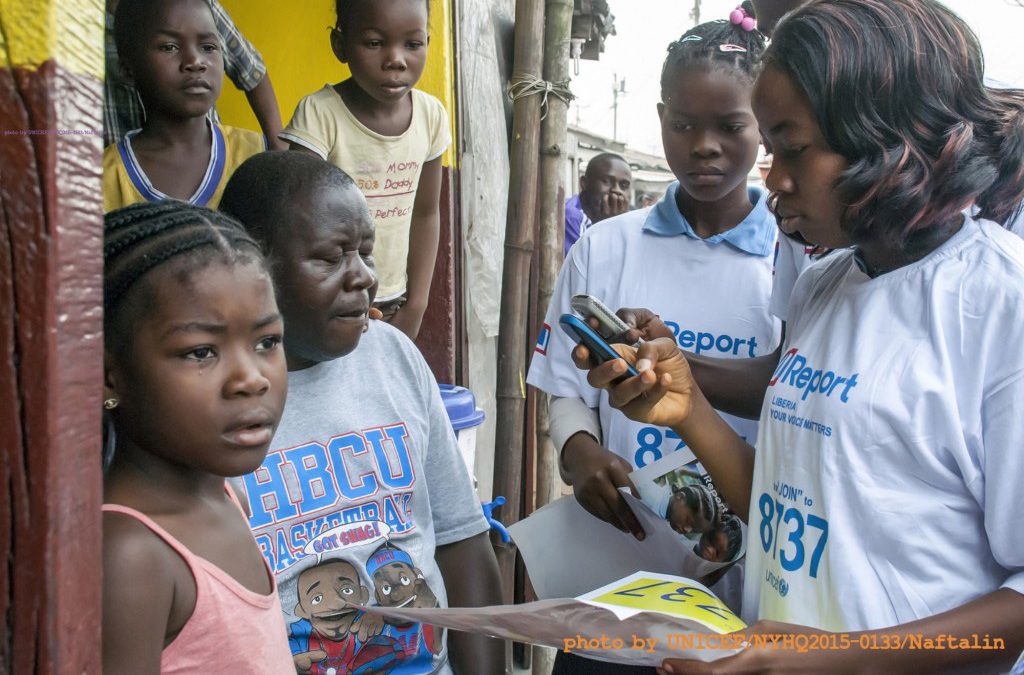 To many David Beckham‘s meeting with the UN Secretary-General last month was just another celebrity moment to mark the universal adoption of the Global Goals — the seventeen objectives the world has just agreed to advance human progress between now and 2030.

In fact, Beckham, a UNICEF Goodwill Ambassador, was there to present something that has the potential to revolutionise the way we think and do international development. He showed the results of a real-time poll organised by U-Report, a simple application supported by UNICEF that allows you to text or tweet your opinions for free on any topic from seventeen developing countries. All you need is a basic mobile phone – no need for a fancy smartphone or a tablet; even older generation ‘dumb’ phones will do. You sign up online or send a text message to a toll-free number and then you start receiving questions on issues that may be relevant to where you live. Questions like “Have you ever been immunised for measles?” or “What places in your neighbourhood do you feel safest from violence?”. Your reply can help identify a problem in your community water system, a health emergency in a remote village or a possible child abuse case — information that can be vital if you live in a developing country with no reliable landline infrastructure.

U-Report was originally piloted in Uganda through a partnership between the local Scouts Association and UNICEF. Since 2010 it has grown to over 1.7 million members in seventeen countries and counting — from Burundi to Indonesia, from Chile to Swaziland, from Mexico to Pakistan. While the basic model is similar to other innovative citizen participation tools like the UN My World Survey, free applications like U-Report have the opportunity to make a difference much faster, from the grass-roots level all the way up to capitals and international institutions. For example, in Uganda, which now boasts a staggering 298,000 “U-Reporters”, all members of the national parliament have voluntarily signed up to the application to monitor what people say in their constituencies. In Sierra Leone and Liberia, thanks to U-Report, it has been possible to connect people to tracing and life-saving services in response to the Ebola epidemic.

The possibilities are endless and they’re not just about making the delivery of ‘aid’, or international co-operation with developing countries, more effective. They’re also about improving economic and social policies across the board. Tools like U-Report allow anyone with access to a mobile phone to express their views, even if they can’t afford a subscription or internet connection. For the first time people from even the poorest places can share ways to improve their lives and preserve their planet. Ordinary citizens are able to voice their views and be heard at the highest decision-making level. Anyone receiving development assistance can have a say on the aid they get so that they can help make it better. U-Report is only one of these participatory tools – the most innovative in my view, an inspiring success story from the South – and others are coming. They may not be the magic wand to find solutions, but we can use these tools to monitor how individual communities, cities and countries turn the Global Goals into action.  I wouldn’t be surprised if the UN itself decided to run a My World 2 soon to make it more dynamic and responsive to the needs of the average global citizen.

So what poll results did Beckham present last month?  Less than 10% responded to the question “What is the ONE thing you want leaders to do for children?” but the answer confirmed once again the importance attached to education around the world. Almost one in three respondents from forty countries selected better education as their top priority – more than ending violence, poverty, inequality or fighting diseases. These results are consistent with what often comes up in more standard reports like this one and what has certainly been my experience as an aid worker in many different environments. Wherever you live, you want good quality education for yourself and your children. You are willing to give up almost anything to offer your children a better chance.