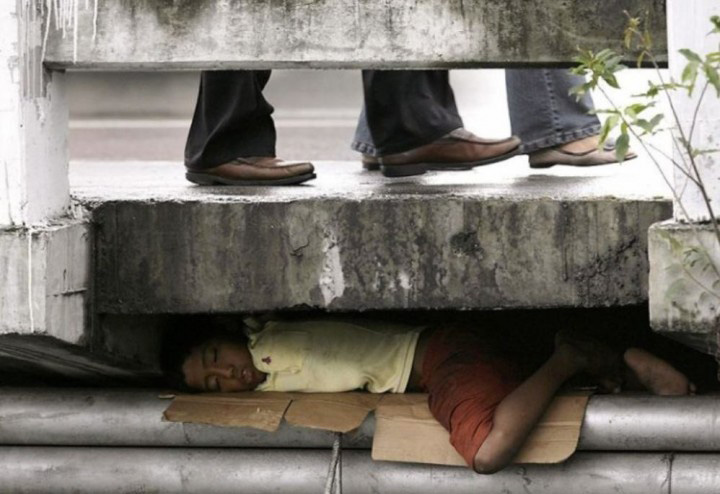 Once again Davos has kicked off the new year with its glitzy gathering of the world’s most influential leaders to discuss the hottest issues on the global agenda. This time the focus was on the so-called ‘Fourth Industrial Revolution’ – how do we ensure the spectacular technological changes of our times benefit our economy and the well-being of our society? How do we limit the risk of seeing more and more insecurity for people unable to keep up with these changes?

A little scratch below the surface and the thorny issue of widening inequality rose again as the common denominator of the last Davos meetings. Echoing the scathing Oxfam report An Economy for the 1%, the Secretary General of the International Trade Union Confederation Sharan Burrow summed it up best: “Our current economic model is inequality by design”[1].

As usual, I started looking for Southern perspectives on the issue and, as usual, found very little. Apart from a few big names at international gatherings like Davos, there are rare opportunities to hear what policy-makers from developing countries actually think of inequality. We don’t really know how they grapple with an inherently unfair economic system, especially at home; nor do we know how they make decisions affecting millions of their fellow citizens.

An exception to the rule is a study carried out by the UN Development Programme a couple of years ago, Humanity Divided: Confronting Inequality in Developing Countries, which includes an analysis of the perspectives on inequality by national policy-makers from fifteen developing countries in Africa, the Arab states, Asia and the Pacific, Europe and Central Asia, and Latin America and the Caribbean.

The findings make for quite a read. Inequality turns out to be a strong concern for most of these policy-makers, even when the data shows inequality trends are declining in their country. There is nonetheless a general recognition that some progress has been made, for example in improving access to education. On a deeper level, how concerned these people are varies considerably depending on whether they are talking about inequality of income or inequality of opportunities. While there is a certain flexibility in accepting the fact that different people may earn significantly different levels of incomes, the vast majority interviewed finds unequal opportunities alarming and incompatible with long-term development plans. Equal opportunities are considered a higher priority, probably because of the widespread belief that everybody should have at least an equal chance to succeed in life, regardless of what income they may end up earning.

Government is the great equalizer in the eyes of most of these policy-makers. It should play a primary role in offering the same opportunities and access to services. It should also ensure a basic living standard to its citizens, although opinions again differ on whether the government should intervene to reduce income disparities, with only two thirds of those interviewed in favour of such an option. Most prefer a mix of policy measures that increase the share of income from capital (for example, the profit margin of small entrepreneurs) or provide some form of conditional cash transfers (think the successful Bolsa Família policy adopted by Brazil). Developing infrastructure in rural areas and reducing unemployment are also two preferred interventions to reduce inequality of opportunities. Fighting tax evasion is by far the most recommended policy. At the opposite side of the spectrum, interventions aiming to redistribute assets, like land reform, or change taxation systems receive a lot less support, possibly because they are politically sensitive.

Politics seems to be the biggest headache indeed for policy-makers in developing countries (I guess you could say that about a lot of developed nations as well). The report findings are clear in showing that these public officials do see the negative impact of inequality, as well as the potential of inequality-reducing measures, but they just don’t consider them politically feasible. Why? Enter the power relations between key constituencies in developing countries: on the one hand, business and foreign investors, who on average tend to be less concerned about inequality; on the other hand, civil society, trade unions and parliamentarians, who are usually more concerned. Policy-makers are stuck between these two groups. Each country is different, yet a likely explanation is that these two groups polarise the political debate until it comes to a standstill, so inequality cannot be reduced. On the contrary, it often keeps growing – and dividing the country.

Humanity Divided offers several practical recommendations to overcome political paralysis but does not specify whether these suggestions come from the policy-makers interviewed or from the authors of the report.  Perhaps a sequel to the report could look into what these policy-makers suggest as a way out of inequality in developing countries. Perhaps this sequel could be presented at Davos next year.