In my previous post, I discussed the international response to the 2010 Haiti earthquake with Sabina Carlson Robillard and her husband Louino ‘Robi’ Robillard. They both participated in relief efforts at the time. Today, they manage Konbit Solèy Leve, a community-led movement founded in the biggest Haiti slum, Cite Soleil, in 2011. In Part Two of our conversation, Sabina and Robi share the objectives of Konbit Solèy Leve and explain how this model of local solidarity can be used to address other similar challenges around the world. Truly an inspiration for finding creative ways to help each other at a time when the coronavirus pandemic is keeping people apart.

Sabina and Robi, what are the Konbit projects? Why did you come up with this idea?

Sabina: Konbit is a traditional way of organizing rural labor in Haiti. Everyone has a piece of land and there are cooperative ways of helping, it’s a way to rotate reciprocity and share social capital, everybody helps one specific individual for one day. This labor-based cooperative has turned into a set of values to get things done. It’s become a philosophy.

Robi: Haiti became a country in 1804. Before then, we had African slaves from different tribes, it was difficult because we didn’t even speak the same language. The colonisers put different tribes together, there was no way to work together. Yet, we still had the ‘togetherness’, the colonisers couldn’t take that away. Personally, I believe the first Konbit-inspired initiative we had was in 1771 to fight against slavery.

Sabina: Robi has done intensive research on the history of Konbit, the revolution against slavery was a form of Konbit, although it was not called like that at the time.

Robi: the entire economy in Haiti was based on Konbit because people didn’t have money or ways to generate it through the industrial revolution. They would use labor as energy and currency. People started using money when foreigners came, all the political crises [that followed] created individualism. However, a couple of leading figures, like Madame Odette Roy Fombrun, have called for Konbit to be the social model for Haiti after the Duvalier regime. After the earthquake we [in Cite Soleil] decided to use this model. The politicians had appropriated all the words meaning peace, solidarity, etc. except for Konbit. Konbit stands for togetherness, positivity, love, it’s a term that reflects everything we want to do. Konbit for the Rising Sun (Solèy Leve) aims to break barriers in Cite Soleil. We wanted to bring all the blocks together, at first by cleaning up the neighborhood. Cite Soleil was very dirty but we invited people to rotate mutual assistance. From farm to farm, we started using this model from block to block. We started in 2011, the same year I started my masters programme. This has given me more ideas to see how we can use Konbit in different ways. That’s how Konbit has become a philosophy, a system. It’s broader than assistance.

Sabina: Konbit runs counter to international assistance or political patronage, both of which are very top-down. Konbit is bottom-up and independent of the [standard] resource distribution system.

Robi: forms of Konbit already existed in our society, e.g. mutual solidarity, community banking to help each other, but people didn’t understand it this way. Konbit is a way people organise themselves as a society, there is an equity element, no one is left out. Our values are solidarity and participation. As individuals, we are poor but together we are rich. NGOs see us as victims, not part of the solution. Konbit ensures we have the power. I visited Guinea Conakry and discovered similar forms to Konbit like ‘wontanara’. [The general perception of our community is that] there’s nothing good about it, everything is about poverty and victims. When I went back, I wanted to give ourselves a present, a magazine documenting the first five years of the Konbit Solèy Leve movement, so we started a Konbit project. We mapped people from our neighborhood working in communications and journalism, we got them together and in less than three months we raised $10,000 in cash and in-kind labor costs. We went door to door asking for money. Even before we got the money we started collecting data, then found a publisher and editor. It was a quality document, we handed it out for free. We wanted to overcome the stigma of Cite Soleil as a place of poverty. We deserve quality and recognition as well. It was a big thing to have something in our hand. That was in 2016. 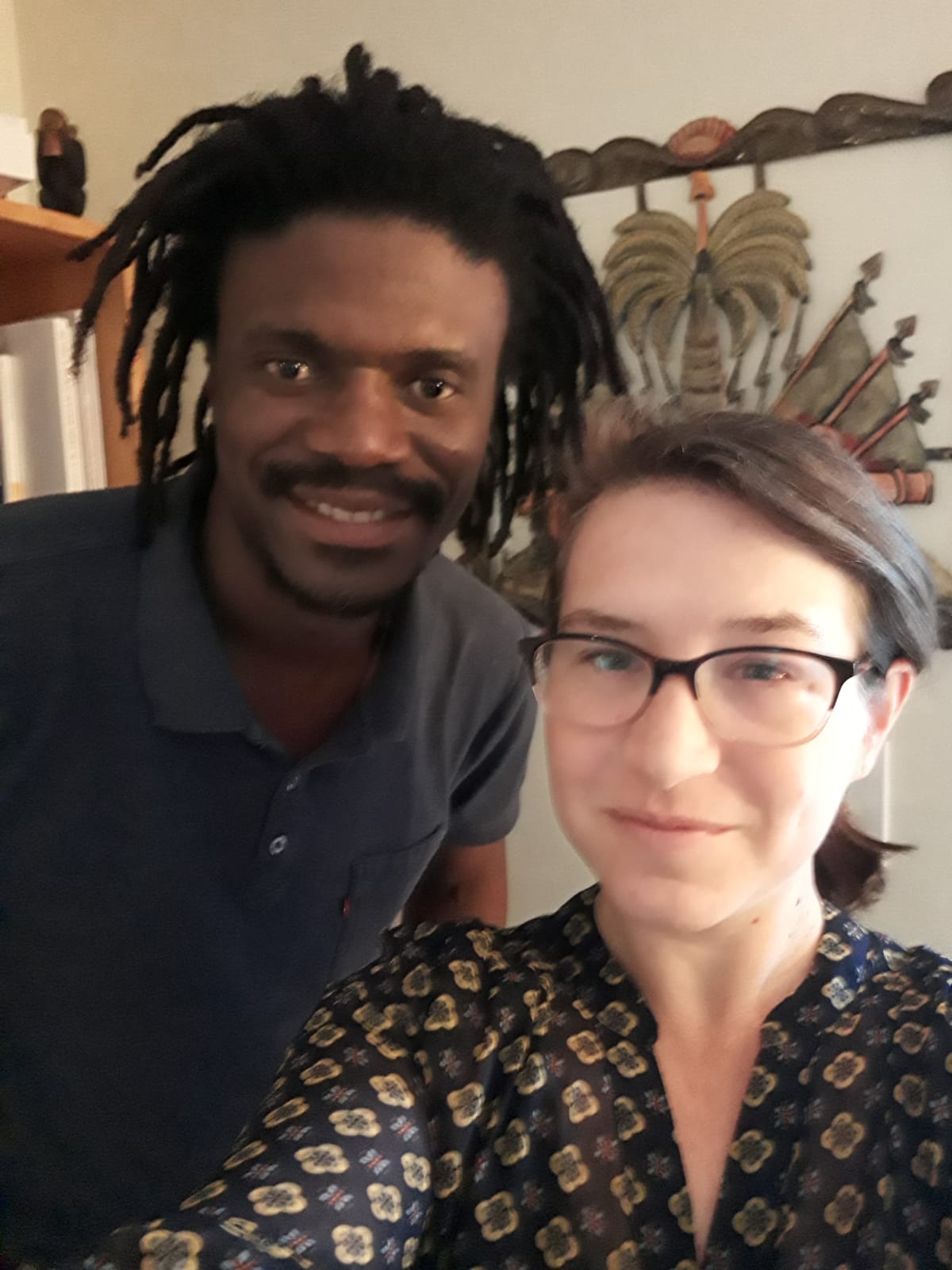 Looking at your website, you describe Konbit Solèy Leve as a social movement promoting people power. You are not a registered organisation and there is no hierarchy. How does this model work in practice?

It can be challenging to organise work this way, everybody has its opinion. One missing piece [before 2011] was a platform where people could meet. We didn’t want to create another organisation, when we started we had a meeting every Saturday and together we decided which block to help.

Sabina: we did not want any hierarchy to prevent corruption, both from politicians and NGOs. So much of development in Haiti is dependent on political patronage; any leader would hardly resist [corruption]. By having no formal leader it is more difficult to corrupt people. Also, a formal headquarters would have required us to choose a specific block, which would have compromised our neutrality. [Keeping Konbit as a loose movement] is a point of strength, it’s made it easier to survive but it also has limits. We can’t do grants, Konbit is an umbrella structure where only individual members can apply for funding.

Robi: another Konbit project was our library, the ‘Konbit Biblyotek’. We had little money left from the magazine project and people really wanted to do a library. We replied by saying the community should contribute instead of applying for donor funding. The response was overwhelming: we went again from door to door and everybody gave something. We realized we could do something bigger, this was a chance to put all Konbit principles to the test. It was a big social experiment, we decided to build the biggest library in Haiti, top quality like everywhere else. We got permission to build, architects from Cite Soleil designed it, they would present a vision for the library and allow people to contribute but we would never ask for money.

We followed three principles. First, you give money because you realise your well-being is tied up with our well-being, not because you feel bad for us. This is a chance to participate in something historical and you see the value in it. You’re not doing us a favor. We would say: Thank you for your solidarity. If you don’t want to participate, that’s ok. Second, we wanted transparency. Every single donation had to be documented. We took a picture of each donation and posted it on Facebook. Third, everybody was welcome.

How would you describe your relationship with your local partners?

Robi: Konbit is not only about people we know or meet, there are other people who contact us. We analyse their proposal and then conclude it’s a Konbit way of operating. If you respect those principles, then you’re Konbit.

Sabina: Konbit is not a permanent structure. We flip local partnership on its head, we reverse it. There can be spontaneous organisations, people who mobilise and invite partners to join. It’s neither rigid nor institutionalized. Konbit is a network more than anything. Those networks and relationships will be operationalized with no artificial timeline to follow. Their structure will stay fluid.

What about your interaction with donors, both national and international?

Robi: we may not know other people but we have our values. Anyone from other institutions is welcome to work with us as long as they share our values.

Sabina: not everyone is able to work with us but there are a lot of international organisations that are ok with being flexible (e.g. American Service Friends Committee, Future Generations, Miyamoto Relief). They accept to work on the terms of the movement. This is an inversion of typical localisation dynamics, usually it’s the local organisation that has to comply with international requirements. We often say no. Sometimes it’s been a struggle, some people argued it would be more effective if we were an NGO or could manage money or interact with politicians. Some co-founders of the movement have respectfully left because they believe in taking a political stand. Some people have learned to ‘profit’ from the Konbit model, and there are still skeptics. It’s not a done deal.

Robi: we map other organisations before accepting money and we channel money directly to them. It’s not easy because every organisation wants to manage a grant and there’s a need for that. For example, in 2011 MINUSTAH [the UN peace-keeping operation in Haiti] wanted to give Konbit Solèy Leve itself some money to build a community center. A few of us decided to say no, other people didn’t know we had refused or they would have killed us! But eight years later, we’ve managed to build our own library. Build people, not the big infrastructure, first.

How do you think Konbit could be replicated in other similar contexts abroad? Perhaps you’ve already tried this approach in other cities or countries…

Robi: It can be replicated but it’s not easy. Sabina is doing what she can but she’s too busy. We’re very open and want to spread out.

Sabina: every place or country has its own version of Konbit, e.g. Ubuntu in Africa or barn raising/neighbouring in the United States. Every good community mobiliser knows how to tap into local mechanisms. But can Konbit become a paradigm shift? How do you make the system more equitable? It may be through cooperatives in some places like Latin America, or through more religious-flavored initiatives like Zakat [Islamic form of solidarity]. Systems like Konbit are not going to be effective every time. They take time [to work], maybe it wouldn’t work in Haiti if there was another earthquake tomorrow. There may be places where a Konbit-like structure may not be ideal.

Robi: [recently], we have managed to organise local emergency response to habitual flooding in different sections of Cite Soleil. Konbit is not just a model but all models, it’s a set of principles all systems can use and adapt to their reality. Do with, not for, the people. Rely on people first.

If you could only ask one thing of international partners (whether they are Konbit donors, international NGOs or UN agencies), what would it be?

Robi: NGOs don’t really want to do bad, all organisations want to do good but it depends on the methods they use. We are in 2020, we need flexibility. We are willing to share and learn. The overall system is not working, the poor become poorer, the rich become richer. When you look at climate change, you realise we are all connected and need to work together to make life better for everyone.

Sabina: rigidity is a major stumbling block, we need more adaptability and learning. US Congress has just passed the Global Fragility Act and there are still pre-determined performance indicators… Institutionalising adaptability actually makes you less flexible.