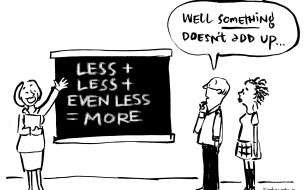 Last week the OECD, an inter-governmental organisation gathering the world’s richest countries, released its annual figures on how much aid, or overseas development assistance, went to developing countries in 2015. On the surface, there is reason to celebrate: once you take out inflation and exchange rate changes, the overall net amount of aid is the highest ever reported, totaling $131.6 billion after an already record-high couple of years. That’s quite an achievement, particularly for those European donors who last year had to face major unexpected challenges, such as the arrival of migrants and refugees at their doorstep.

Look deeper into those figures and the picture changes quite a lot. Welcoming those refugees in donor countries was actually paid for by money that was meant to be used for other, equally important purposes, like fighting poverty and disease in the global South. These costs nearly doubled last year, meaning that a sizeable portion of ‘international’ aid – up to 34% of individual donors’ pots – never crossed Northern borders in reality.

Another controversial use of aid funds that donor countries can now make is for security reasons – fighting ‘violent extremism’ or training the military, for example. These objectives have little or nothing to do with “promoting the economic development and welfare of developing countries”, as purported by the official definition of aid. Not that donors shouldn’t fight violent extremism or other security threats. The point is that aid already represents such a tiny percentage of donor countries’ Gross National Income (0.30 percent on average) that these governments should really be looking for other sources of funding to pay for their non-aid interventions.

To me, however, the most troubling conclusion from analysing the new figures is how little aid is given where it is needed the most, to the so-called ‘Least Developed Countries’ or LDCs. These 48 nations, gathering almost a billion people across Africa, Asia, the Pacific and Latin America, all have in common the lowest levels of socio-economic development on earth. Yet, despite their dire condition, aid to LDCs represents just a minor part of the overall total and has actually declined until 2015, when it rose by only 4 percent. How is it possible when for some of these countries, like Malawi, aid represents as much as 40% of their national budgets?

True to my mission, I have been trying to find out from LDC sources themselves. Easier said than done. Apart from outdated documents prepared for once-in-a-decade conferences – the last one dating 2011 – it is deafeningly silent out there. No official reaction to the release of aid figures in recent years, no joint positioning on aid to LDCs. I hope I am missing something here.

On the civil society front, things look a bit more encouraging. Last February, representatives from about a dozen African civil society organisations signed a statement to denounce the declining aid levels to sub-Saharan Africa, where 43 countries still rely on aid more than on any other external financial flow to provide their populations with essential services, like health care. The statement also defended the positive impact that aid can make when allocated properly. Yet, to find a Southern voice speaking specifically about aid to LDCs we need to go back at least five years, when LDC Watch, a civil society network based in Nepal, reported major disparities in the way aid to LDCs had been distributed in previous years – more than half of it had gone to only eight out of 41 countries.

Despite record-high aid figures, it is not only a question of ‘how much’ but also of how aid is allocated. Figures may well be on the rise, but if the funds do not target the populations most in need, then numbers risk becoming irrelevant.