The elephant in the room 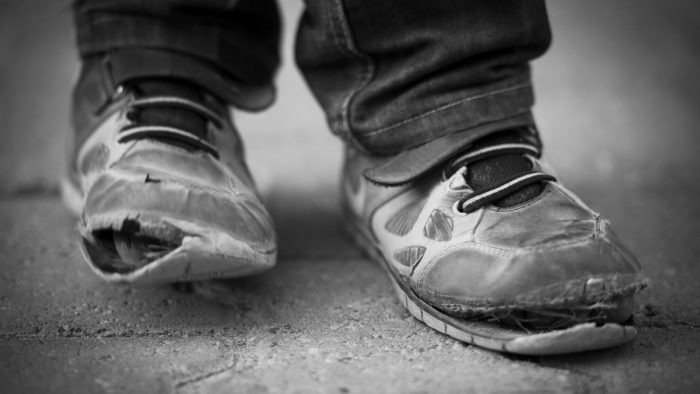 If you ever visit Rome, you may encounter a beggar that will leave you in awe. Apparently of African origins, a red flower in her hair, she sits on a stool in the middle of the sidewalk in Largo Argentina – smiling to strangers, singing sometimes. On the cobblestone floor, a round hat lies upside down next to a cardboard sign that reads “Poor but happy”.

I have found myself often thinking of this woman when planning anti-poverty campaigns or writing policy recommendations. Year after year – particularly around this time, as we mark World Food Day today and World Poverty Day tomorrow – hundreds of development and humanitarian organisations make every possible effort to draw public attention to ‘the poor’, recounting their daily struggle to put food on the table. Deep inside, however, I have always felt a bit uncomfortable using this language. Who wants to be called ‘poor’ after all? Doesn’t it sound condescending to label someone this way, despite our best intentions?

It turns out ‘poor’ people rarely consider themselves to be just that. Some of the best research on this topic –the groundbreaking World Bank’s Voices of the Poor (2000-02) and its sequel Moving Out of Poverty (2007-09) – has shown that poverty comes in many different shapes, dimensions and perceptions. People living in poverty “themselves make important distinctions between the dependent poor, the resourceless poor, the temporary poor, the working poor, and God’s poor”[1], just to get a flavor of the many nuances gathered from the views of more than 60,000 women and men in need interviewed in sixty countries. Even when people live in ‘chronic’ poverty – meaning that they have experienced poverty for many years –, they still tend to see themselves as going through a transition to better living. And while this transition may vary depending on economic, social, psychological and other factors, it generally feels like being powerless.

Whether they lived in Latin America, South East Asia or West Africa, the people interviewed by the World Bank looked at poverty as a changing condition rather than a permanent situation. In other words, they didn’t identify themselves with being poor but did whatever they could to move out of poverty, reflecting their hope to change their living standards as soon as possible. As the research concludes, poverty is actually dynamic and driven by two major factors: individual initiative and opportunity to turn it into positive action.

The one exception to this thinking is the so-called “we are all poor syndrome”[2], which often leads entire Southern communities to voluntarily call themselves poor, hoping to receive assistance from their interviewers or other outsiders, like aid agencies. This is a perverse, but unfortunately common, effect of trying to help that further complicates the picture. Are we pushing people in developing countries into ‘acting poor’ simply by asking about their status? Does the way we frame our questions create an unnecessary, if not harmful, demand? And what is the cost of not asking at all? I wish we took more time to discuss these tough questions.

A key finding from Moving Out of Poverty is that any attempt at reducing poverty should be guided by lessons from people living it:

“The problem is us, not poor people. We have to change. If only we can make the world look like what poor people think it really is—a place where hard work pays off, where there is equality of opportunity—we will see mass poverty reduction in our time. Imagine a world in which we listen to poor women, men, and young people, and fix what they think isn’t right”[3].

I doubt the development sector has listened to this recommendation since the report was published. We still use condescending language and oversimplify the aspirations and struggles of millions of people facing poverty on a daily basis. The conclusions of Voices of the Poor and Moving Out of Poverty should become essential reading for anyone working on these issues. As the main author of these studies, Deepa Narayan, told me, new research is always needed but more important it is for the findings that already exist to be used and disseminated.

Meanwhile, the World Bank’s President Jim Kim shared ‘the best story in the world’ last week, announcing that the number of people living in extreme poverty (that is, living on less than the new figure of $1.90 a day) is likely to fall for the first time to under 10 percent of the world’s population by the end of 2015.

I wonder if that 10 percent call themselves ‘extremely poor’. It would be good to know.