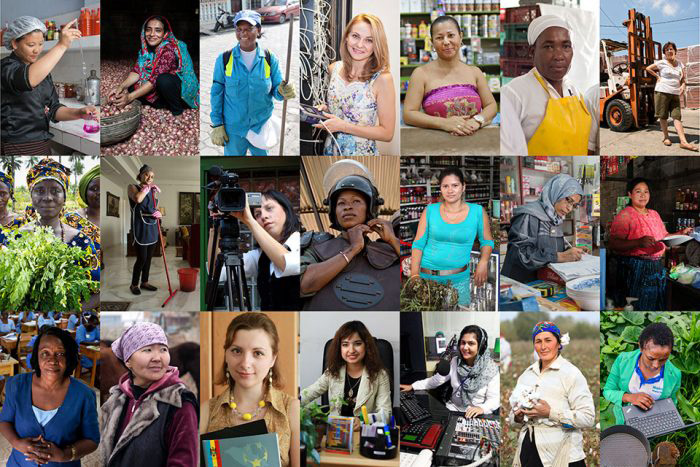 This year’s International Women’s Day is about gender equality at work. A fitting theme to remember where and why we mark this day – it all started with a female garment workers’ strike in New York in 1908.

More than a century later, working conditions for women have dramatically improved, yet they are still worse than for male colleagues. Globally, women get paid almost a quarter less than men to do the same job. Only half the women of working age are actually in the global labour force (compared to 76 percent of working-age men) and even that half mostly works in the informal economy, which usually means lower-paid and less secure jobs. This makes no sense, not even in economic terms. Advancing women’s equality in the workplace today would allow the global economy to grow by a staggering US$12 trillion by 2025.

These numbers only scratch the surface of gender discrimination at work worldwide. Statistics for the global South are even more worrying. However, several initiatives are popping up that effectively support Southern female workers’ leadership through corporate channels. For example Danone, the French food company, has partnered with the United Nations HeForShe campaign to promote cross-gender mentoring and business training for female employees in countries as different as Singapore, Indonesia, China, France, the Netherlands and Russia. For some female workers, like young Indonesian Lupita Ardhyaningrum, co-founding the HeForShe chapter at Danone Indonesia has meant feeling empowered, perhaps for the first time in her life, after surviving sexual assault at age ten:

For other girls, such as Pakistani Urooj Ashraf Awan, asserting women’s rights has helped her to enter the male-dominated field of civil engineering in a country that is second to last in global gender equality. In this case, too, the key to success was to raise awareness of gender discrimination together with other women and men. Within 48 hours of her campaign launch, Urooj managed to gather the support of 6,000 thousand men and boys in raising awareness of gender discrimination:

It should not be surprising to see men and boys support women’s rights. From Chile to Tanzania to Lebanon to India, the vast majority of the population interviewed as recently as 2015 thinks equal rights are very important.  The mind shift is taking place all over the world, right before our eyes, if we are willing to look beyond stereotypes.

Of course, believing something is important does not necessarily translate into progress at work. But here, too, there are encouraging signs that coming together to support gender equality in the workplace can produce massive results – without having to wait until 2095, as  current projections predict.

Take the example of Paul Polman, the CEO of multinational consumer good company Unilever. Polman is supporting the HeForShe initiative by committing to reach full gender parity in senior leadership positions by 2020. Unilever’s ratio is currently 45%. And he is not the only corporate giant head who is doing this. Nine other male executives, including the CEOs of Twitter, Vodafone and PricewaterhouseCoopers, are championing the same initiative in their companies.

Just like in the case of Indonesian Lupita and Pakistani Urooj, it takes both individual leadership and support from women and men alike to advance equal rights in male-dominated fields. It would be great to hear if you have other similar examples to share.